Julia: Look, I’m waving my mittens at you frantically. What’s going on?

Mike:  I know exactly what’s going on because of our ‘language of gloves’ game, which was a big hit in our recent Keats-related event at the excellent Hastings Book Festival in September. By the Regency era, slinky-glove-semaphore had developed into a fantastically elaborate language for making surreptitious dates or furiously cancelling them. Frantically waving mittens, you say… Are you saying: ‘Two yards of ale and a bag of winkles please?’ Or ‘can you fetch me a bap with that notoriously see-through ham that’s a Vauxhall Pleasure Gardens’ speciality throughout the nineteenth century?’ You might explain what this has to do with Keats…

Julia: Keats was a keen visitor to the Vauxhall Pleasure Gardens, the Glastonbury of its day. If you wanted a balloon ride, to watch a battle reenactment or just take a spoony walk in a dimly lantern-lit shrubbery, you headed over the river with your chums. Keats saw a South London lovely there, and was so captivated by way she removed her glove that he wrote her a sonnet FIVE YEARS LATER. We did some research into the coded way Regency ladies wore their gloves and incorporated it into the new show.

Speaking of research, I’ve discovered today that the ‘Sally Forth’ is the last course of a Georgian meal. You’d have your last bit of something to eat at a friend’s house, and then you’d sally forth, replete, into the night. Any Sally Forths at Keats House on Thursday?

Mike: We’d like people to sally forth – that is, come along! If they do, it being so close to Keats’ birthday, there will be a Sally Forth – a slice of cake and perhaps a glass of wine with which to toast JK on his 227th birthday. Our theme being ‘encounters’, the company will be lively and mixed – fellow writers, self-declared geniuses and mysterious possible lovers. We’ll be exploring why such meetings matter, the decisive ways in which they developed him as a writer and thinker and the poems they prompted – by Keats himself and the poets that followed him. Sounds a decent night out to me. What do the gloves say?

Julia: The gloves say ‘The lady may be persuaded!’

(We’ve just been to the Lake District to perform ‘A Joy Forever: Keats, Wordsworth and other loaded encounters’ at Rydal Mount)

Julia: So, about those ‘monstrous breakfasts’ …

Mike: Well, you found that phrase in Keats’ letters. Which we took to mean expansive (we had monstrous great breakfasts every morning of our Lakes stay at the beautiful Foxghyll Country House B&B).

A multi-storey breakfast is exactly what Keats would have required after the stiff walk up and down the side of Stock Ghyll Force, the many-tiered waterfall he describes so brilliantly in a letter home in June 1818. He had to fuel up because he and his friend Charles Brown were about to embark on a colossal walk north from the Lakes into the Scottish Highlands and across to Northern Ireland. They also planned to call in on William Wordsworth at his home at Rydal Mount, a poet Keats hugely admired and at the same time thought pompous and boring. Difficult conversational road to be steered between those opposing responses – he’d have wanted to have all his faculties at full throttle. What happened, Julia?

Julia: He should have made a plan. (Maybe he was too star-struck to suggest a plan.) When Keats got to Rydal Mount – after the waterfalls, post the breakfast – the cupboard was bare. Wordsworth was out. We know now that he was off canvassing the area on behalf of the local Tory candidate, but Keats had to leave a ‘sorry we missed you’ note – like a Parcelforce man – on Wordsworth’s mantlepiece, and the meet-up was a bust. Our show was about Keats’ encounters – the planned meetings and the bumpings-into that prompted poems. To kick off with this missed meeting was a bit of a cheat, but we did try and make the meetings more convivial as the show went on. Who else did Keats meet? Who did we meet?

Mike: First, we went the romantic route, exploring Keats’ five-year fixation with a woman he’d once seen slip off a glove  in Vauxhall Gardens, and then his relationship (such as it ever was) with the elusive Isabella Jones – your favourite Keats phantasm, eh Julia? Actress (possibly) and woman-about-town (Bo-Peep, the opera and the Theobalds Road being where she and Keats encountered one another), Isabella Jones was also an out-and-out style supremo – you had something to say about her impeccable taste in a poem of yours, Julia. We looked at Keats’ immersive relationships with books, books being people too, and his famous happening-upon Coleridge on Hampstead Heath. We also took our seats around the table at the Immortal Dinner, hosted in December 1817 by Artist of Genius, the utterly prickly Benjamin Robert Haydon, which was attended by everyone of consequence: Wordsworth, Keats, Lamb and the Comptroller of Stamps. This allowed us to raise a glass to Keats and claret, his wine of choice, and share an interactive food-poem-recipe game. It worked a treat and I’m looking forward to cooking up that one again.

Julia: Mrs Jones is my favourite character in the Keats universe, it’s true! When we go to the Hastings Lit Fest (our gig is in St Leonards, which used to be known Bo-Peep) we’ll have more to say about her and her exquisite home furnishings I’m sure. She had a parrot in her sitting room: I like to think of Keats teaching it a poem.

Mike: Thanks to Leo Finighan, curator, the team at Rydal Mount, our audience and the Wordsworths, particularly William for the arbour-with-a-view he inspired there. On to Bo-Peep!

We’re taking our new book A Joy Forever: a walk out with John Keats on tour.

As well as the title of our book, A Joy Forever is the name of our Keats-themed reading series in which we take a playful and social approach to the life and writing of the poet. We’ve performed at Keats House in Hampstead, the Keats Shelley House in Rome and other literary festivals round the UK, each time taking a different route through the poems, letters, biography and history. Our new show for 2022 focuses on Keats’ relationships with his friends and peers. While our secret rhyming shorthand for the show might be ‘Keats Meets’, officially, it’s …

A Joy Forever: Keats, Wordsworth and other loaded encounters

In 1818, John Keats set out on a walking tour of the Lake District and Scotland. He called in at Wordsworth’s house, but missed him by a whisker: the elder poet was out for the day.

Keats’ missed meeting with Wordsworth is the starting point for a session of lively chat about the gatherings, get-togethers and chance encounters that kept the Romantics’ circle spinning. Expect reading and conversation, old and new poems, games and giveaways.

Our job for the summer is to read, research and select the best poems, extracts and anecdotes to tell this story. Meanwhile, here’s where you’ll be able to find us:

I enjoyed my one term of school metalwork. Wielding a rasp as long as my 11 year old arm, I made a wobbly spinner, an enamelled copper pendant and a tiny tin man to balance on your outstretched finger. It’s been a long while since the teacher, Mr Russell, set up a solder-blistered portable tv in the workshop for us to watch the lifting of the Mary Rose in a morning lesson, and my metalwork skills have rusted since. Working in the Paekakariki studio polishes up memories of the wary respect necessary for operating equipment with the power to burn, crush or amputate the careless user. I listen to Matt’s health and safety chat. I approach his plate cutter with reverence. It’s a sharp and weighty machine, and one dizzy twitch on its perfectly balanced handle would leave me with no outstretched fingers whatsoever. Linda Hughes’ beautiful line illustrations for A Joy Forever have been made into individual magnesium plates, and I need to trim their edges before they can be fixed to their blocks alongside the text, ready for printing. The slightest pressure on the cutter’s blades shears ringlets of excess metal from the plates, but I complete the task with all my extremities thankfully still intact. 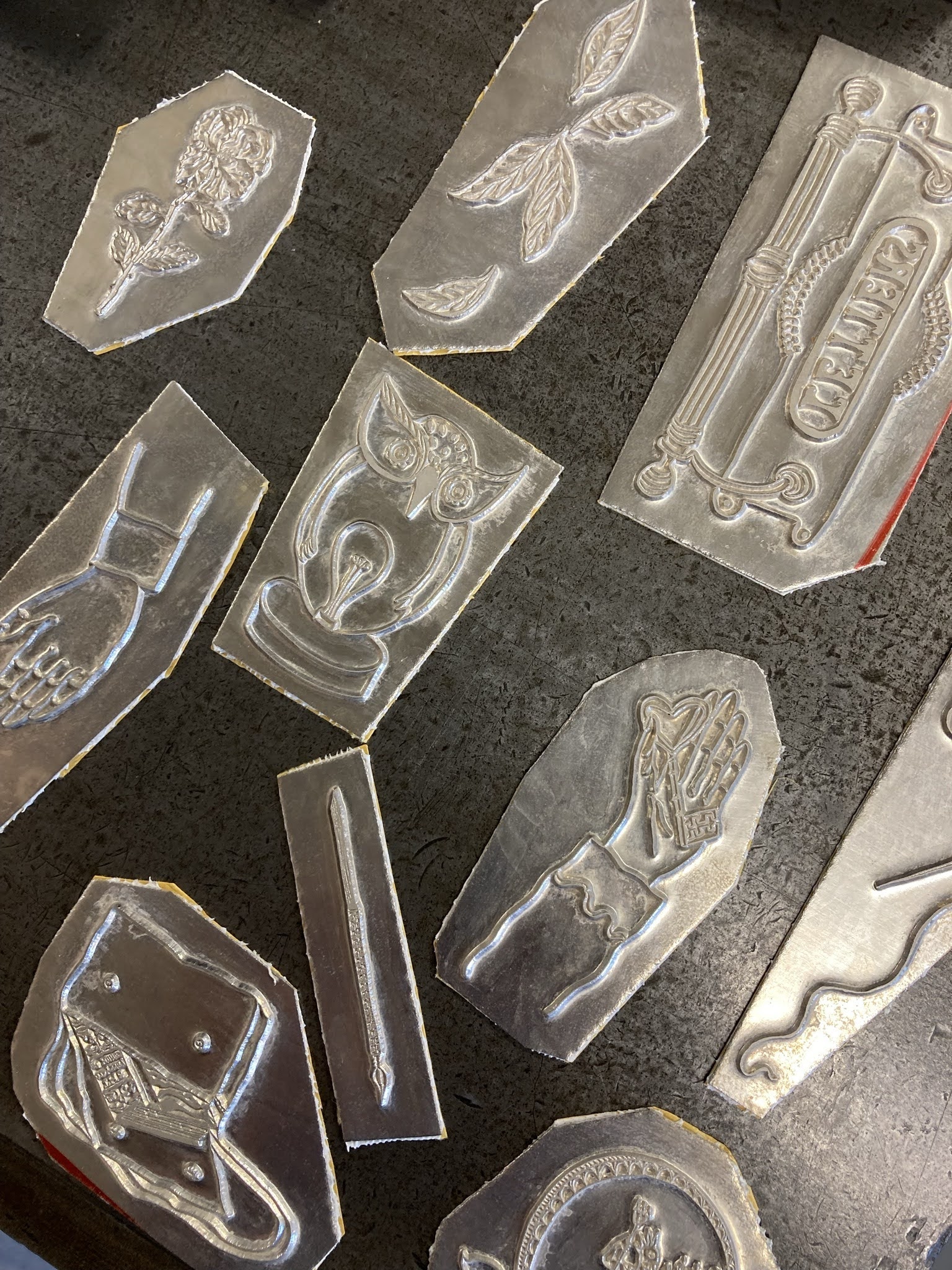 Mr Russell was married to Mrs Russell, my English teacher. I hope they’d both enjoy a book made from poems, magnesium and hot lead.

It’s close work, letterpress. Boggling slightly, we sat hunched over a drawer of Garamond, havering over which tiny brass moulds to queue up in the chase, to reproduce our text. Don’t drop letters, they’ll never be found. Don’t pick a wrong one. Don’t put a wrong choice back in the wrong cell. 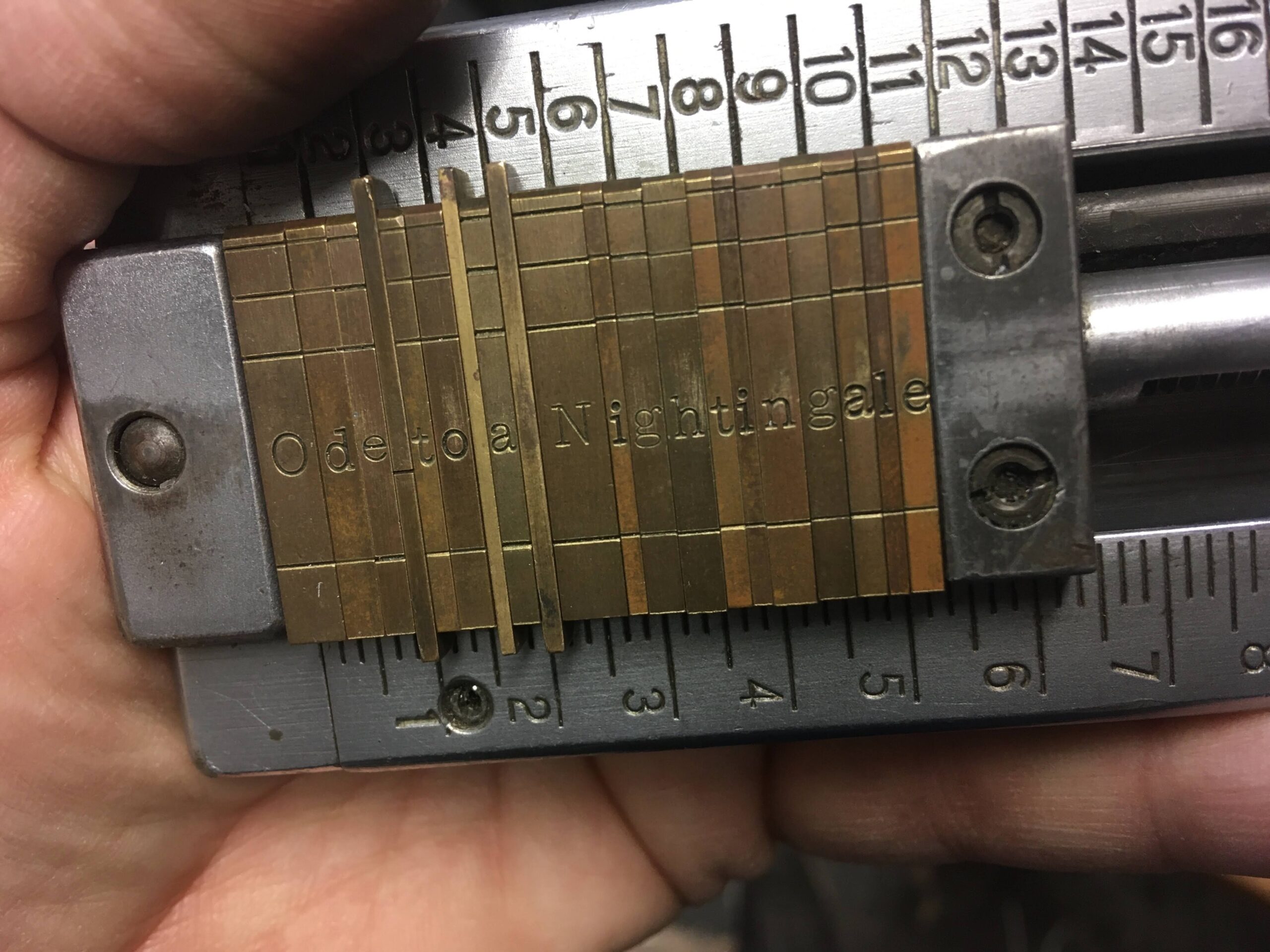 We then moved to the Ludlow, its little bucket of hot lead quivering. You lock in the chase and pull down a lever, which makes a satisfying chock. Just like a ten-pin bowling ball returning to meet your hand, out slides the slug – your letters transformed by the Ludlow into one silvery, weighty segment. You pick it up to admire it and your fingertips smoulder. You’ve one more title from your 48-page book. Any mistake and back it goes in the pot, vanishing in the gloop. 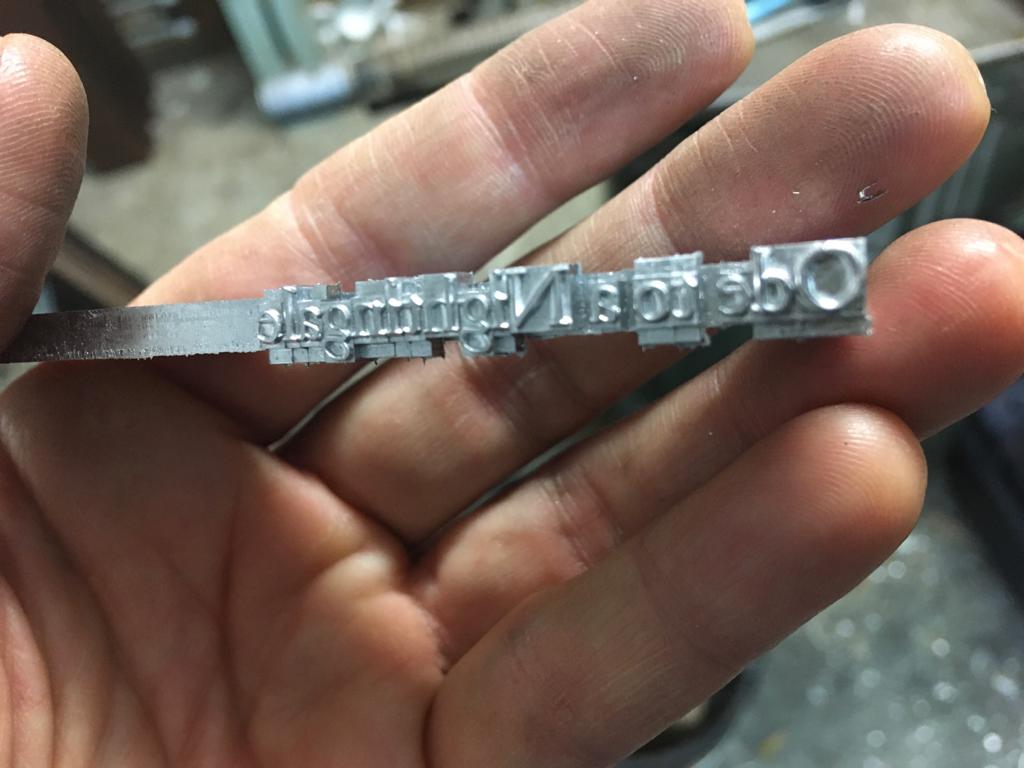 We squeezed back to the drawer (space is tight at Paekakariki Press), freed the chase and dropped the individual letter brasses back into their individual cells. The Ludlow trembled and you sensed the contour lines of your fingertips smudging. You’re back office; beyond, Matt and Alexa exchange a word about Radio 3. From the lead pot a little smoke lifted.

A wrong turn driving to Suffolk once landed us in Essex, and the resulting conversation ultimately inspired Julia’s pamphlet Now You Can Look We have googledoc gigabytes of similar accidental ideas that will one day lead to the next books or the next events. When time and money allow, this is where we’ll tell you about them.